The Unga Project is a high-grade gold project with claims covering both Unga and Popof Islands along the Aleutian Island chain of Alaska. The islands lie along the Alaska Peninsula and approximately 900 kilometres south west of Anchorage, Alaska.  The project includes two historic high-grade gold mines – Sitka and Apollo. The mines closed around 1922 after depleting the free-milling gold ore.

More than 25 distinct areas with showings of epithermal precious- and base-metal mineralization, porphyry copper-gold mineralization, and extensive areas of hydrothermally altered rocks have been identified on Unga Island, particularly along the Shumagin and Apollo-Sitka trends.

Most of the exploration to date has focused on the Shumagin and Apollo-Sitka trends on Unga Island and the Centennial deposit on Popof Island. The rest of the prospects identified warrant further exploration.  Priority targets include numerous vein targets north of the Shumagin trend, the Zachary Bay porphyry copper-gold prospect on Unga Island and the Red Cove prospect on Popof Island.

Prospectors discovered gold on the southeast side of Unga Island in late 1800’s and the Apollo Mine became Alaska’s first underground gold mine.  The mine reportedly operated between the late1880s and the early 1920s and produced approximately 130,000 ounces of gold; the nearby Sitka mine operated between 1900 and 1922, but gold production was limited to a few thousand ounces. Both mines produced gold from the upper, free-milling gold portions of sulfide-rich lodes. When the mines were operating, supplies and personnel were shipped directly from San Francisco and Seattle to site by ocean going barge.

Multiple companies conducted exploration campaigns on Unga Island and neighboring Popof between the 1970s and 2005, including Alaska Apollo Gold Mines("AAGM"), Resource Associates of Alaska (“RAA”), UNC Teton Exploration Drilling, Inc. (“Teton”), and Battle Mountain Gold Corporation("BMGC").  The most extensive and systematic exploration occurred in the 1980s, which resulted in the discovery of the Centennial deposit on Popof Island.  Underground development on the SH-1 Deposit was originally carried out during the same period as at the Apollo mine, but lay dormant until exploration resumed in the 1960s and 1970s and has been the focus of exploration since 2011.

Heliostar’s Unga Project comprises a combined area of 250 square kilometres on Unga and Popof Islands. The islands sit near the bottom of the Alaska Peninsula and approximately 900 kilometres southwest of Anchorage, Alaska.  The properties consist of lands owned by the State of Alaska, the Unga Corporation, the Shumagin Corporation, the Aleut Corporation, and 16 patented U.S. federal mining claims owned 100% by Heliostar.

Unga and Popof Islands enjoy cool summers and rainy winters allowing the company a nine month field season.  The commercial port of Sand Point is located on Popof Island which has an airport with freight and scheduled passenger air service and a dock with barge loading and unloading facilities and services to support these facilities.

Over the years, geologists identified a significant number of diversely mineralized showings within the large land position of the Unga project. As we discussed earlier, the project appears to offer the full spectrum of high-sulphidation to intermediate-sulphidation (and possibly low-sulphidation) as well as porphyry style targets.

It is likely that groups of Unga project mineralized showings are genetically related to magmatic and intrusive activity of the Popof volcanics and discrete magmatic-hydrothermal centers.  The most obvious of these is  Orange Mountain, a high-level, high-sulphidation alteration zone that can reasonably be inferred to be underlain by an intrusion.

The Shumagin trend intermediate sulphidation gold-silver occurrences lie on either side of an intense zone of advanced argillic alteration or lithocap development at Orange Mountain.  The Zachary Bay copper-gold porphyry target, which lies about 7km north of Orange Mountain, may represent a completely different manifestation of a similar magmatic-hydrothermal system, but in this case at a deeper erosional level than at Orange Mountain.

The project offers a target-rich environment with significantly reduced exploration risk thanks to previous exploration efforts.

Each of the four deepest significant intersections of the SH-1vein system returned single-sample values in excess of 10 g/t gold.  These four intersections lie along a 400-metrestrike extent of the vein zone, below the central portion of the presently drilled vein zone.  The SH-1 vein-breccia zone remains strong in these holes, and the potential for growth remains high. Geologically, the SH-1 Zone consists of multiple, sub-parallel to anastomosing overlapping veins, stockwork, and vein cemented breccias filled with quartz, pyrite, and calcite ±adularia ± rhodochrosite ± green clay ± sphalerite ± galena and lesser chalcopyrite.

The principal prospects along the Shumagin trend include the SH-1vein zone, Pray’s Vein, Bloomer Ridge, Orange Mountain, and the Aquila veins.

The Apollo-Sitka trend cuts across the southern portion of Unga Island about three kilometers south of, and parallel to the Shumagin trend.  Steeply dipping epithermal quartz-carbonate±adularia veins are exposed along faults at the historic mine sand at primary prospects. These include the historic Sitka and Apollo mines, the Empire Ridge prospect, the California prospect and the Heather prospect. Historic production from veins and vein breccia contained gold, copper, zinc and lead. Mining at Apollo and Sitka focused on free milling gold in the upper portions of the intermediate sulphidation gold systems, leaving base-metal sulphide rich veining un-exploited.  The extent of this veining has not been defined and only limited exploration work has been undertaken on this trend since the cessation of mining.

Aquila is a target located 6 km to the south west of the SH-1 resource, along the same Shumigan trend which was discovered and drilled by Teton in the early 1980s.  Goldand silver mineralization occurs in veins, which consist of crustiform-banded quartz and quartz cemented breccia with amethyst locally in vein centers, at grades of up to 110 g/t gold over 0.4 metres. Mineralization is defined over an 850m strike length by surface samples returning values up to 30 g/t gold.

Drilling at Centennial defined a historic, non43-101 compliant resource of 4.8 million tonnes at an average grade of 1.43 g/t gold.

Previous workers interpreted the bulk of mineralization as subhorizontal but there is evidence in sea-cliff exposures at the southern extent of the prospect area for a high-angle structural control that may host higher grades.  However, previous work didn’t test this concept due to insufficient drill density and the predominance of vertical holes. Most of the identified gold lies within 50metres of the surface. However, the historic drilling didn’t go below 200 metres. Only six of the 59 holes penetrated deeper than 150 metres.

The Centennial deposit provides an example of potential bulk-tonnage-style gold mineralization at the Unga project.

Orange Mountain is the topographically elevated, central portion of the Shumagin trend. It is a large body of quartz, alunite and high temperature clay alteration.  It is interpreted as an advanced argillic lithocap related to a porphyry copper-gold system or a high sulphidation epithermal gold system.  The dominant feature of the area is an extensive (square kilometer) body of strong silicification.

Three historicaldrill holes intersected abundant pyrite, up to 0.35 g/t gold and elevated concentrations of mercury. The prospect has had insufficient drilling to test this large area for gold-silver mineralization of the high-sulphidation type.

The Zachary Bay copper-gold prospect lays north of the Shumagin and Apollo Sitka trends. In 1975, one of four drill holes intersected disseminated copper and gold mineralization 0.41 g/t gold-equivalent over 107 metres (0.28 g/t gold and 0.11% Cu). Mineralization indicates the potential for a copper gold porphyry deposit. However, there was no follow up exploration work done.

The Shumagin, Apollo-Sitka, Centennial, and Zachary Bay prospects show the diversity of target types present at the Unga project. While the Shumagin, Apollo-Sitka, and Centennial areas have received the bulk of exploration work to date, each of these prospects warrants further exploration. All other prospect areas within the Unga project, including Zachary Bay and the numerous, primarily epithermal vein-type prospects (Aquila, Norm's Vein, Pook, Pray's Vein, Bloomer Ridge, California, etc.), remain relatively unexplored.

These early-stage prospects require grass-roots research, but hold enormous potential. For example, the Bloomer Ridge target, which lies less than one kilometre southeast of Shumagin, yielded numerous rock-chip gold values over an apparent strike length of almost one kilometre, and it could quickly advance in importance.

All the existing prospects came from a first-pass level of surface exploration. Significant portions of the property remain under-explored. Heliostar is developing exploration strategies to address the remaining area. Recently developed concepts of high-sulphidation alteration(e.g., Orange Mountain; Zachary Bay) and laterally associated epithermal systems (e.g., Shumagin; Apollo-Sitka) will be the basis of further exploration strategies for the entire project. 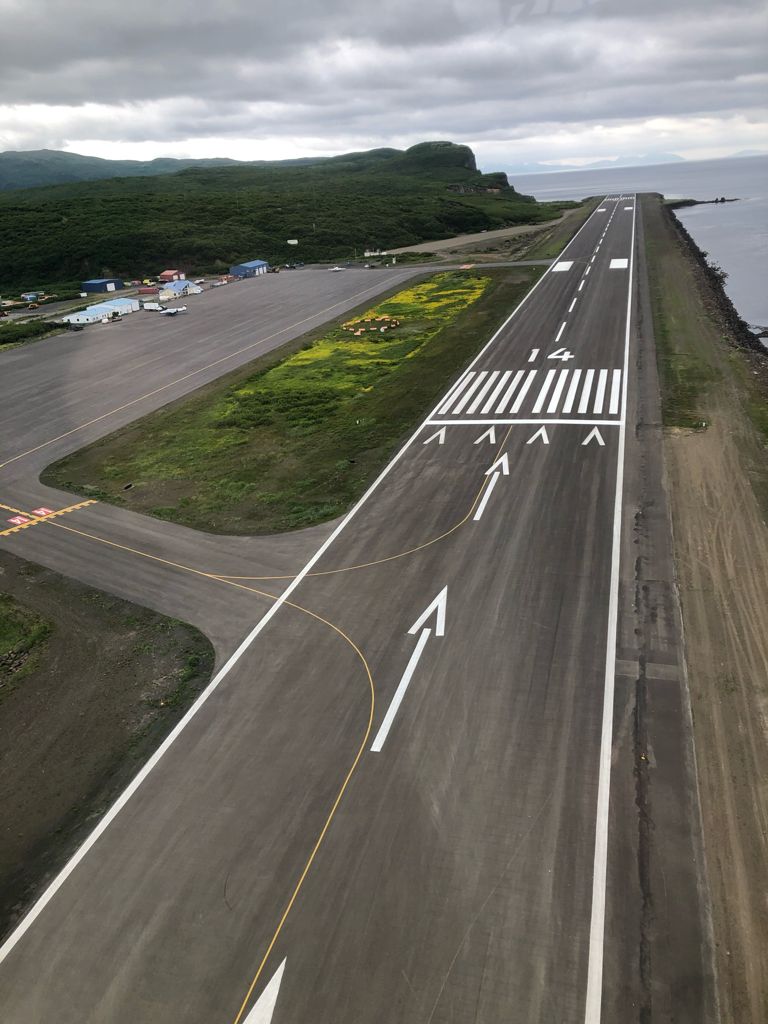 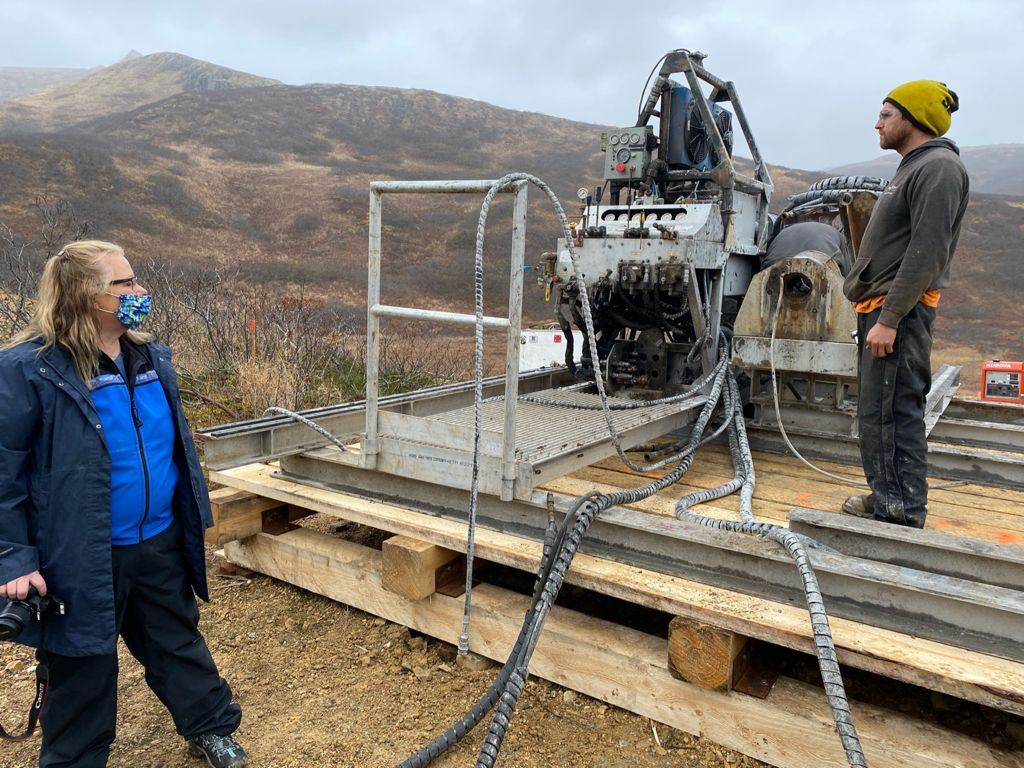 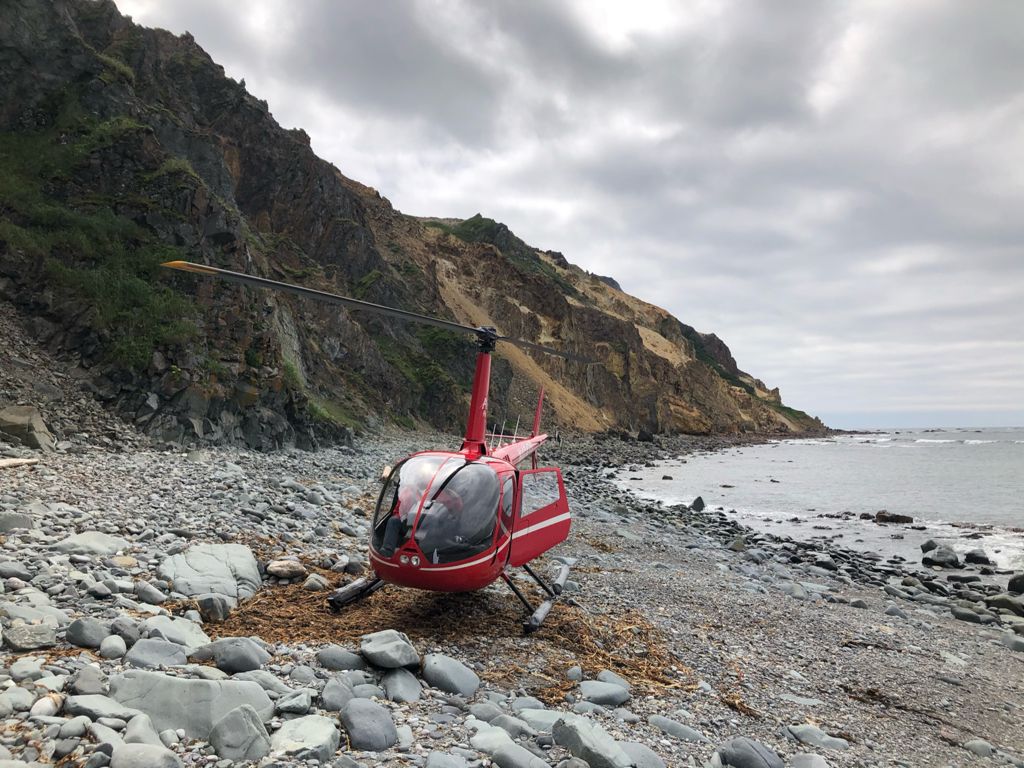 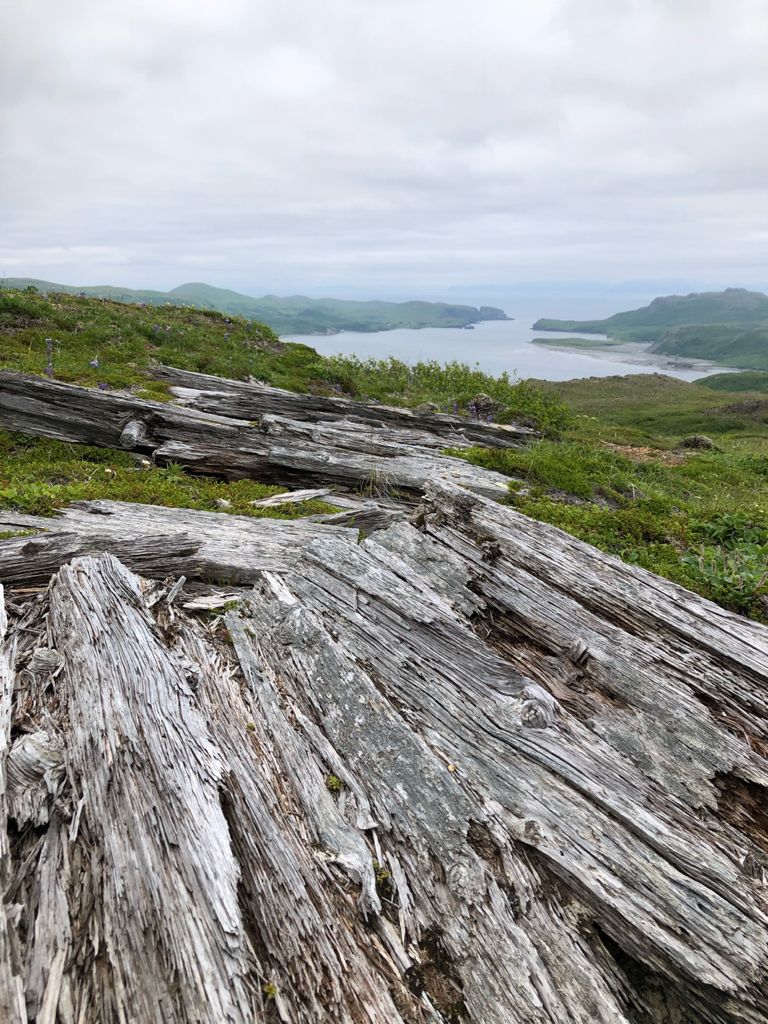 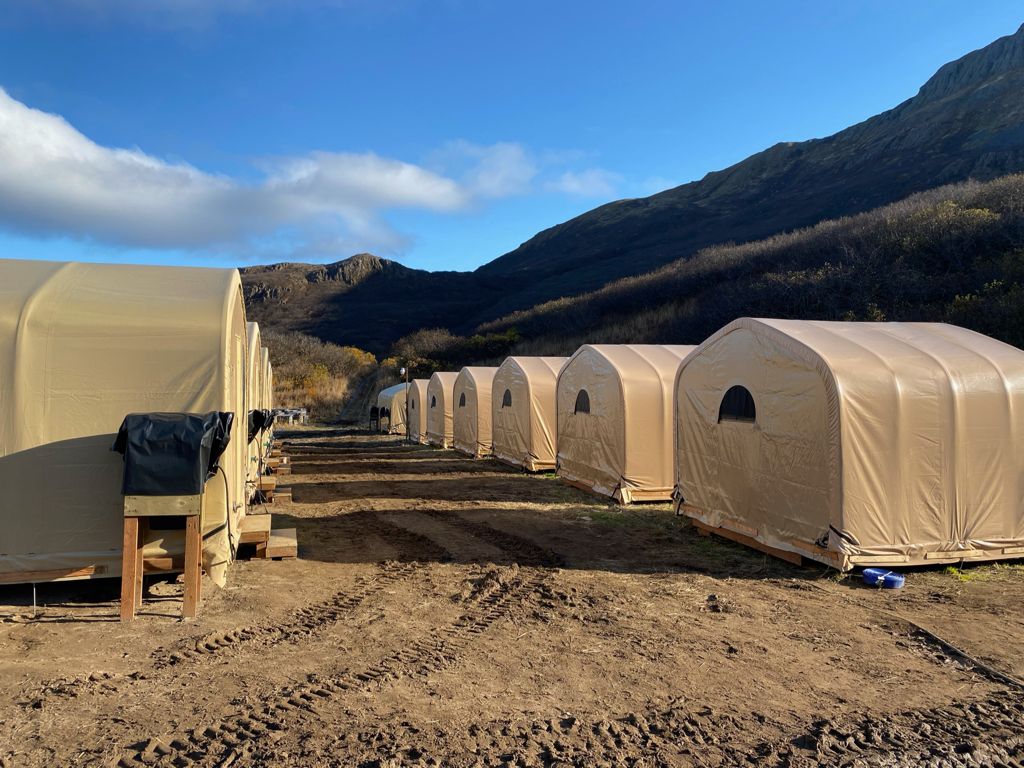 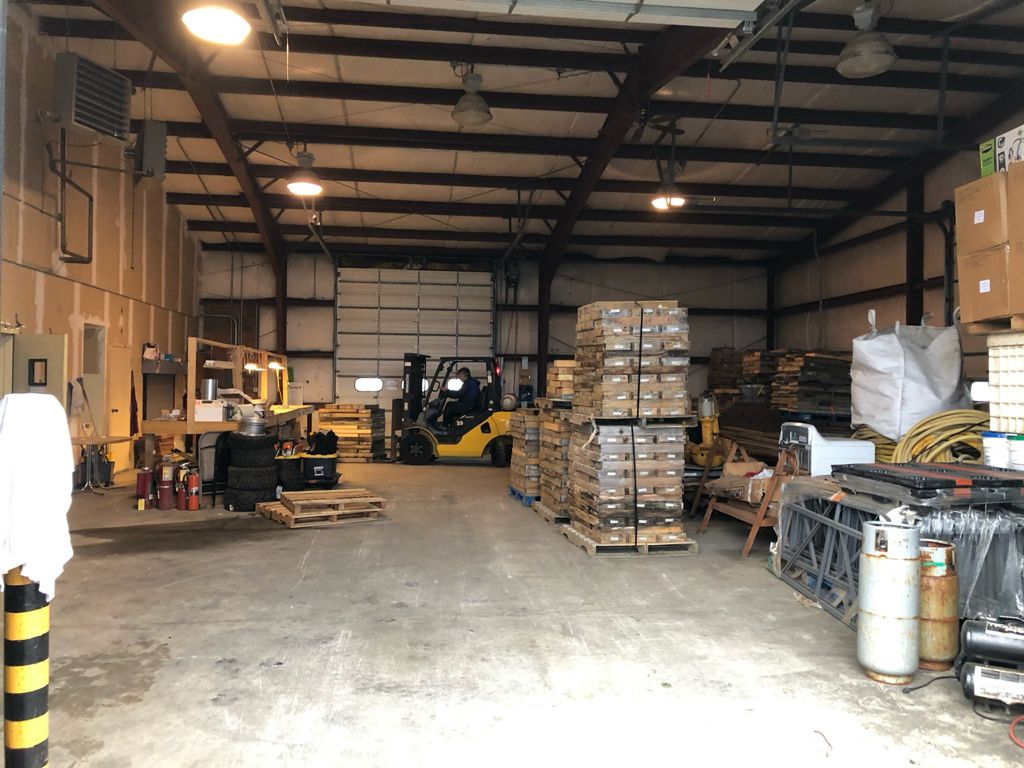